Skip to code content (skip section selection)
Compare to:
Lewisville Overview
Lewisville, NC Code of Ordinances
LEWISVILLE, NORTH CAROLINA CODE OF ORDINANCES
Lewisville, NC Comprehensive Plan
2015 COMPREHENSIVE PLAN
INTRODUCTION
GOVERNANCE
COMMUNITY CHARACTER
NATURAL ENVIRONMENT
FACILITIES & SERVICES
LAND USE
TRANSPORTATION
HEALTH, SAFETY & WELLNESS
CITIZEN ENGAGEMENT
APPENDIX
INTRODUCTION
Lewisville has demonstrated its commitment to visionary thinking in its short history as an organized town. Incorporated in 1991, the first Comprehensive Plan was adopted shortly thereafter in December of 1992. The plan provided the essential guidance and framework for the young town. It assessed the town’s strengths and weaknesses, opportunities, values and goals, and set forth policies by which strategic decisions were made for shaping the town.
Continuing its visionary trend, community officials recognized the need to update the town’s policy statement for its future every five years. Key recommendations of the first comprehensive plan were fully embraced by the town. The town square project and the Downtown Overlay District were two of the most notable. 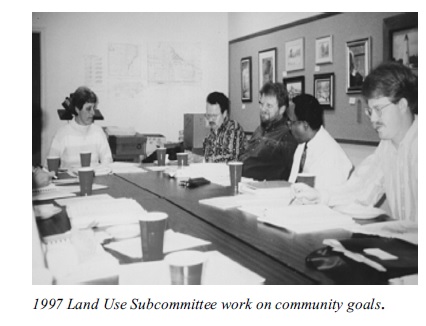 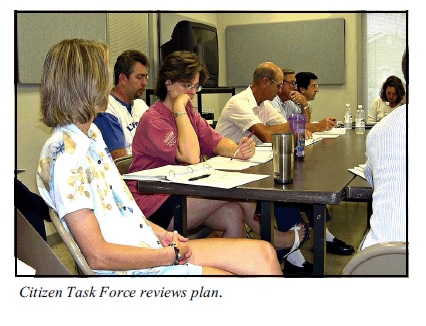 The Comprehensive plan Update for 2005 contained three main sections:
1.   Introduction with process, plan organization, community profile and community vision.
2.   Nine chapters which presented action plans covering topics facing Lewisville at that time:
•    Land Use
•   Transportation
•   Downtown
•   Natural Environment
•   Community Character
•   Housing and Neighborhoods
•   Community Facilities and Services
•   Governance
•   Health, Safety and Wellness (New chapter for 2005)
Each chapter was organized around a specific vision statement on the topic. Then background, goals and recommended actions were  presented.
At the end of each of these chapters was an Implementation Program. This section stated specific action steps for achieving the recommended actions and ultimately the community vision. Timing of implementation steps is a critical component of long- range planning. The highest priority recommendations were those indicated by the specific year for implementation or by defining it as short term. This plan assumed that short term implementation should occur within five years. Long term implementation should occur within a five to ten year period. Additionally, many recommendations were to be implemented on an ongoing basis. The Implementation Program also assigned responsibilities to specific agencies capable of carrying out the recommended actions.
3.   An appendix was  attached with additional information on specific subjects.
The recommendations of the task forces were sent to the Comprehensive Plan Review Committee which took these recommendations and created the final draft of the new Comprehensive Plan. The Plan was forwarded to the Town Council for approval.
The 2010 Process
The Planning Board prepared a plan for the 2010 update. It consisted of a Stakeholders Committee, Coordinating Committee, Task Forces (4), and a Review Committee. 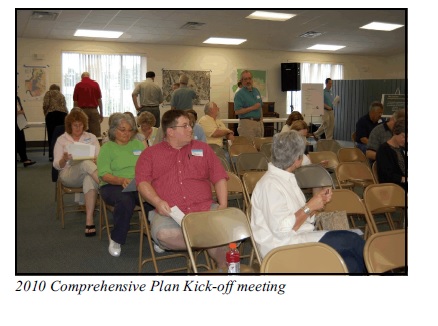 The Stakeholders consisted of Town Council Members, Planning Board members, chairs of the town’s boards and committees, the town attorney and various staff members. The chapter titled Downtown was changed to Chapter 7 Commercial Districts; and a new chapter titled Chapter 10 Citizen Engagement was added. The Chapter 6 Land Use was expanded to include the Vienna Business District and Rural Overlay areas. The committee suggested the members of the Coordinating Committee and Review Committee. (Task Force members were volunteers who had attended the public kick-off meeting.)  A proposed time line for completion was approved.
The Coordinating Committee was responsible for providing Task Force oversight, management, guidance,  background information, conflict resolution, and the process for completing their assigned chapters.
The Task Forces were charged with reviewing their assigned chapters and updating as necessary. 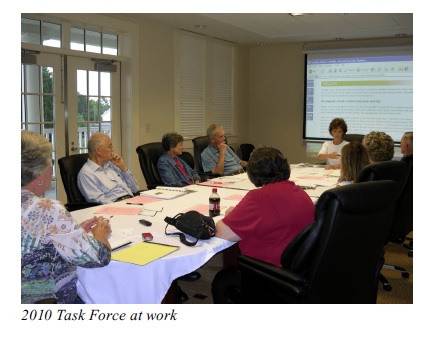 The Review Committee was established to review the work of the Task Forces so that the completed document would be uniform and consistent. 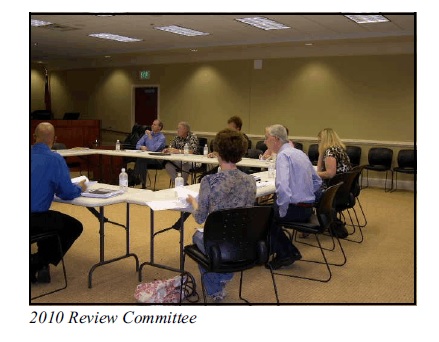 The 2015  Process
In early spring of 2014, the Planning Board determined that the first step in updating and informing the 2015 Comprehensive Plan process would be to review and assess the 2010 process. Specifically, the goals were to reinforce past successes and modify future actions based on lessons learned. The Planning Board reviewed the 2011 After Action Report, solicited input from previous Plan participants and had robust discussions and brainstorming. Three key goals emerged from the assessment:  1) To ensure consistent and equal review across chapters; 2) To maximize public input utilizing multiple methods and  tools; and 3) To tap relevant reference documents gathered, published, adopted, and/or engaged over the past 5 years. Based on those imperatives, the Planning Board outlined a procedure with timeline for 2014/2015; submitted it to Town Council; and began its update in the fall of 2014.
Although the Planning Board served as the primary review committee, its key responsibility was to advocate for and collate the wishes and desires of the public based upon feedback received over the previous five years. Public priorities were gathered based on the results of the 2014 Town Survey, as well as three separate Citizen Input Sessions held February through April of 2015.

The Citizen Input Sessions were very well attended with most meetings having over sixty (60) participants. Each session was facilitated by a representative of the Piedmont Triad Council of Governments (PTRC). Prior to the beginning of each session, participants were asked to complete a mini-survey covering key topics to be discussed.
This information, along with the responses given at the session, were indexed by PTRC staff and was used to create a matrix of all available information that could be used to update the Comprehensive Plan. Other information used within this matrix was from WS/FC Legacy Plan, Lewisville Greenway and Pedestrian Connection Plan, Citizen Survey and the EPA Downtown Workshop results.
Additionally, the Planning Board reached out to existing boards and committees to gather any specific input from their various perspectives. Content experts, stakeholders, relevant documents, and town staff provided ongoing input and expertise.
In early May, 2015, the Planning Board began a detailed chapter by chapter review, inserting this information into the 2010 text as well as updating other statistical information found within the document.  Final formatting and the addition of new pictures, maps and other graphics were completed in August of 2015.
Changes made for this document were:
•   moving the Vision statement to the end of each chapter;
•   combining Housing & Neighborhoods and Commercial Districts into Land Use;
•   renumbering the chapters to accommodate the chapter changes;
•   expanding demographics; and
•   amending the Environmental Quality and Sustainability in the Appendix  to reference chapters in this Plan, Legacy, and the UDO.
The final draft was submitted to the Town Council for their review in September 2015. 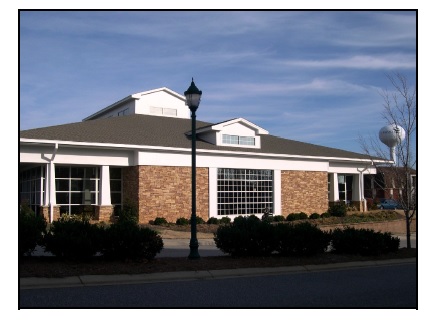 Our Community Vision of the Future
Lewisville in the year 2035 will continue to be a desirable place to live, work and recreate. Lewisville’s rural landscape, featuring  woodlands, open fields, lakes, rolling hills and small streams, has been preserved through conscientious conservation efforts in the face of growth pressures. Quality of life will be enhanced through efforts by the town, citizens and businesses by managing growth and will be guided by citizen-developed long-range plans. Development will be carefully managed to minimize impacts on the environment and costs to the community and will continue to enhance the character of the town. Cooperative relationships with Winston-Salem, Clemmons, Tobaccoville and other surrounding communities will continue to benefit Lewisville. Downtown’s small-town atmosphere will continue to reflect the town’s rich heritage, and its diverse and dynamic spirit. Our transportation system will provide a wide variety of transportation options, resulting in advantages which include improved traffic flow and air quality, safety, health and well-being. Lewisville will continue its commitment to improving the quality of protecting its pastoral character and maintaining strong, diverse housing and neighborhoods while sustaining a low overall tax rate for community residents.
This vision will guide decision makers into the future. 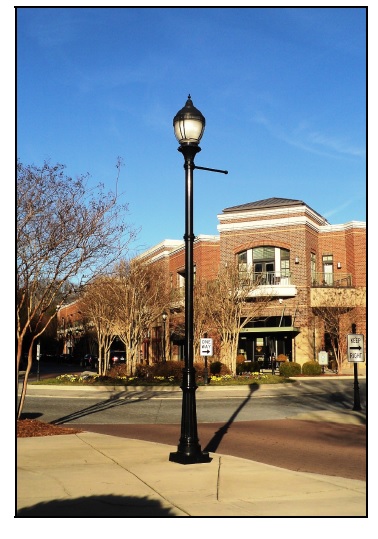 Disclaimer: This Code of Ordinances and/or any other documents that appear on this site may not reflect the most current legislation adopted by the Municipality. American Legal Publishing Corporation provides these documents for informational purposes only. These documents should not be relied upon as the definitive authority for local legislation. Additionally, the formatting and pagination of the posted documents varies from the formatting and pagination of the official copy. The official printed copy of a Code of Ordinances should be consulted prior to any action being taken. For further information regarding the official version of any of this Code of Ordinances or other documents posted on this site, please contact the Municipality directly or contact American Legal Publishing toll-free at 800-445-5588.

Back to Code Library
Previous Doc
Next Doc
0 items available